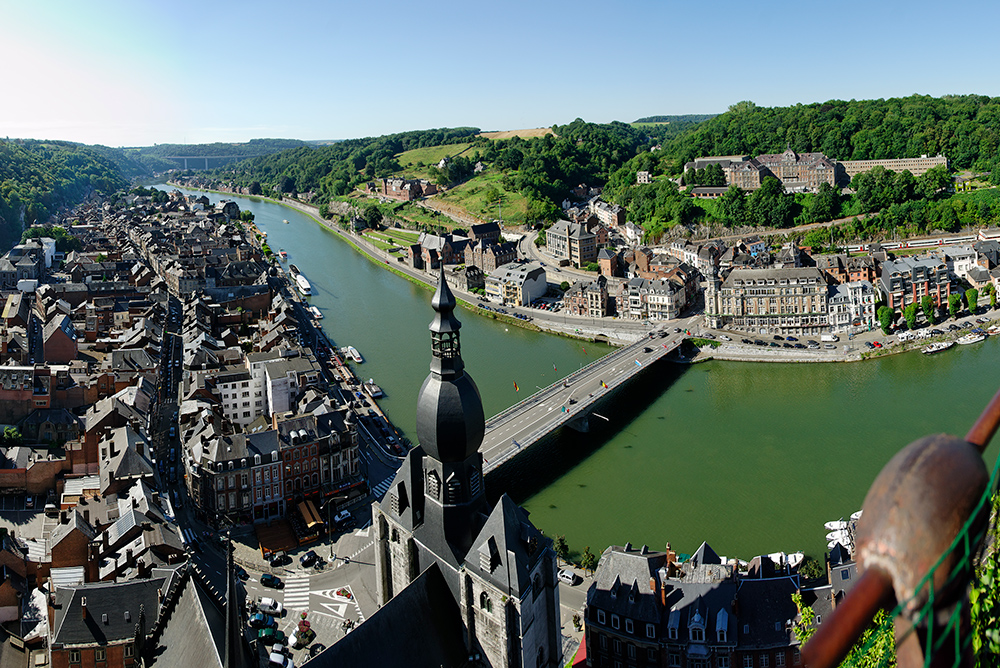 Wallonia is the extremely attractive French-speaking region of southern Belgium. It’s known for its medieval towns, Renaissance-era architecture, great Industry history, especially from the beginning of the 19th to the middle of the 20th century and traditional cuisine or local but world-famous beers. You will be able to discover Mons Tournai Namur Dinant, the smallest town in world Durbuy, Liege with is great religious and industrial past as well as its modern time turned towards the future and much more to experiment…

AM Arriving in Charleroi the day will be dedicated to the visit of Mons.

Mons has within its walls some treasures acquired over more than a thousand years and deserves a precise visit. Its numerous monuments, churches and private houses still bear witness to its long and magnificent history. The first step is the City Hall Square to have a look on the city and its surroundings. Then, enjoying the charms of its old streets, its parks and gardens let’s discover together the richness of its civil and religious architectures, and particularly its twelve churches and chapels, including St. Waltrude’s Collegiate Church, a remarkable Gothic monument, and the Town Hall of the 15th century.  If the time allows it finally, let’s relax around a table where gastronomy reigns supreme.

AM Visit of Tournai

Built on the banks of the Scheldt, Tournai is one of the oldest towns in Belgium. The richness of its heritage reflects the influences that have shaped it throughout its history. Listed as a World Heritage Site, the cathedral and the belfry are its flagships. Art Nouveau also has pride of place there with its Museum of Fine Arts built by Victor Horta.

Thus the atmosphere of the city almost on the border with France is a superb link between the two countries.

PM In the afternoon we will reach the famous Dubuisson Brewery: one of the oldest Belgian family breweries located in Pipaix in the province of Hainaut. They brew one of the strongest Belgian beers in Belgium, the Bush Ambrée at 12% ABV. You can there discover the brewery itself as well as the Beerstorium: an interactive experience at the heart of the history of the Brewery and the universe and the secrets of its beers. The visit will immerse you in the castle of Ghyssegnies, where it all began for the Brewery in 1769!

AM In the morning, we will reach the Historical Unesco protected Canal du Centre.

Considered a pure masterpiece of Belgian civil engineering, the Historic Centre Canal and its four hydraulic lifts are one of the most remarkable examples of an industrial landscape from the last century. Initially designed to link the Sambre and Scheldt basins and thus facilitate the transit of goods from the North to the South of the country, the Historic Centre Canal is now exclusively devoted to river tourism.

PM The afternoon will be for a visit to Coal mine du Bois du Casier another Unesco historical site. The Bois du Cazier was a mine in what was then the town of Marcinelle, near Charleroi, which today is preserved as an industrial heritage site. It is best known as the location of a major mining disaster that took place on August 8, 1956 in which 262 men, including many Italian labourers, were killed. Aside from memorials to the disaster, the site features a small woodland park, preserved headframes, and buildings, as well as an Industrial Museum and Glass Museum.

AM In the morning the journey will start by a walking tour in the capital of Wallonia Namur:

located on the confluent of the Meuse and Sambre rivers, a very spectacular citadel protects the city from where the French (XVIIth century) and German (XXth century) troops were stopped in their invasion.

This is also the best place to get a panoramic view on the Meuse valley and on the city itself.

PM Along the Meuse river we will reach Dinant with its unique church and scenery (top picture), native place of the saxophone inventor Mr. Adolphe Sax before to discover the called “smallest town in the world (and probably one of the cutest) Durbuy: known for its stone houses and cobbled streets. Nearby, Confiturerie Saint-Amour produces artisan jams. Clipped hedges depict animal and human figures at the Topiary Park. The half-timbered Halle au Blé was built as a corn exchange in the 1500s. Just one of most amazing places to discover!

AM Bouillon is in southern Belgium, near the French border. It is known for the medieval Bouillon Castle, overlooking the winding Semois River. Along the river is the Archéoscope Godefroid de Bouillon, a multimedia attraction illustrating the life and times of former castle resident and crusader Godfrey. A unique immersion in the medieval European time.

PM In the afternoon we will go to Orval. This Abbey is a Cistercian monastery founded in 1132 in the Gaume region of Belgium, part of Florenville in the province of Luxembourg. The abbey is well known for its tumultuous history and spiritual life as well as for its local production of the World-Famous Trappist beer Orval and a specific cheese. One of the most interesting places to visit in the whole country!

This full day will be dedicated to discovering the biggest and probably the hottest city in Wallonia as we called it the “ardent city”. Liege for long has been a commercial religious and cultural hub. Its old town is filled with landmarks dating to the medieval era. The Grand Curtius museum houses archaeological treasures and art within a 17th-century mansion, while Opéra Royal de Wallonie has staged operas since 1820. A legend said that this is native place of the Belgian fries. For sure one of the local drinks is a strong gin called Peket and this is the place of the world-famous Liege waffle.

AM This will be a full day sightseeing to the luxurious Ardennes nature to the region of Spa with the spring city sightseeing.

Spa is a town known for its mineral-rich thermal waters as well as one of the first leisure destination in europe. This is why one of the first European Casino was built there as the nearby famous F1 race Circuit and its Museum.

PM Verviers. Before getting home, isn’t nice to bring back the best local goods for the family and the friends. We cannot miss the visit of wonderful Chocolate Museum of Jean-Philippe Darcis, Belgian chocolate ambassador and pioneer of the macaron in Belgium. There you will retrace the origins and history of this fantastic treat through a chocolate trail.

To visit the back side of the ardent city to rest along the Meuse river or to enjoy the local foods, products and last gifts.

Before the transfer to Charleroi

Lunches and dinners are selected according to proposals.
Guides and assistants can escort all transfers and sightseeing.
Number of days, logistic and changes to accommodation location are possible.

All services are only available upon request and upon availability.